FOR IMMEDIATE RELEASE No. 3243

Will offer important advantages for weather, airport and remote-sensing radar and satellite communication 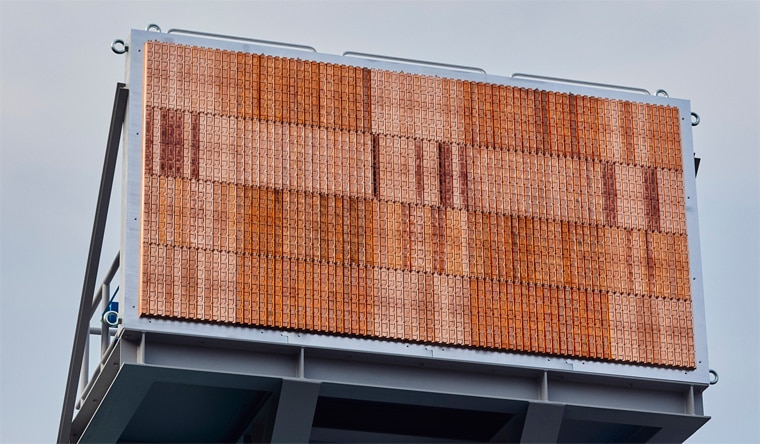 The antenna is made with resin injection molding for reduced weight and low cost. Resin, however, is easily distorted by heat compared to metal, so resin-molding waveguide parts must be secured with screws, which require screw-holes that can degrade the antenna's electric performance. Mitsubishi Electric solved this problem with a proprietary "boss-iris structure," which incorporates small, round "boss" protuberances for screw holes and an "iris" diaphragm waveguide to adjust electrical characteristics (part of the boss and the rib structure serve as the iris). The antenna also achieves industry-leading performance thanks to the proprietary structures: "boss-iris structure" and "novel ridge structure" which is a fence meandering along the waveguide to control finely the radiation from the slots. As a result, the new antenna's injection-molded design maintains high performance as well as weighs 40 percent less and costs 90 percent less than conventional metallic versions.

Mitsubishi Electric developed the antenna with Hiroshima Institute of Technology, and received support from the Japan Science and Technology Agency's A-STEP program under a project entitled "Development of a novel resin ridge waveguide antenna with eminent low sidelobe." For the project, a large-scale array antenna prototype consisting of about 2,000 elements was manufactured and evaluated. In tests, the antenna demonstrated high performance, including 60 percent suppression of sidelobe, 90 percent reduction of cross polarization, and 10 percent greater electric power efficiency compared to conventional patch array antenna.

Note that the releases are accurate at the time of publication but may be subject to change without notice.